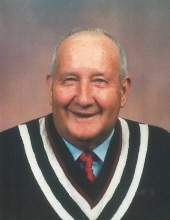 He was born May 27, 1927 in Williamsport, MD to the late Charles Edward and Elsie Davenport Newlin Litten.

Rowland graduated the 8th grade from Williamsport Public School in 1941 ranking proudly third in his class. He was employed by L'Aiglon and EJ Fennel until 1987 and most recently by Office Suppliers, retiring in 1997. He was a member of the Downsville Church of the Brethen. Our father enjoyed singing for the Lord. He started out singing in a quartet that traveled around to various churches throughout Maryland, Pennsylvania, Virginia, and West Virginia. Later, he became part of a men's chorus known as "The Singing Brethern", taking pride in never accepting a penny for their performances . In addition, he sang in  several church choirs. Pap was an avid gardener up until his passing, providing endless vegetables to his family all summer long. He was also a fan of the Detroit Tigers, Chicago Bears, Boston Celtics, and even at times rooted for the Dallas Cowboys.

Due to COVID restrictions, there will be no viewing. A graveside service will be held Saturday, February 20, 2021 at 2:00 PM at Rest Haven Cemetery officiated by Rev. Wilkie Nunn. There will be a celebration of life held at a later date.

The family requests the omission of flowers. Memorial donations may be made to Mid Atlantic Disaster Relief Auction c/o Downsville Church of the Brethern 1828 Dam #4 Rd, Williamsport, MD 21795.
To order memorial trees or send flowers to the family in memory of Arthur Rowland Litten, please visit our flower store.