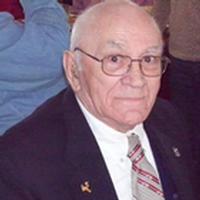 Donald Robert "Don" Gossard, Sr., 88, of Hagerstown, passed away peacefully on Sunday, July 24, 2016 at his home, while surrounded by his loving family.

Born February 28, 1928 in Waynesboro, he was the son of the late Earl Franklin and Estella Irene (Benchoff) Gossard.

He was a member of Pathway Community Church in Hagerstown; UAW 171; the West End Fire Hall; AFL-CIO Union and AARP. Don enjoyed wood working as well as supporting his favorite sports teams, Baltimore Orioles and the Ravens.

A funeral service will be held at 12:00 noon at Pathway Community Church, 1028 Salem Ave, Hagerstown, on Thursday, July 28, 2016 with Pastors Justin Repp and Curt Snyder officiating. Interment will follow in Rest Haven Cemetery.

In lieu of flowers, memorial contributions may be made in Don's name to Hospice of Washington County, 747 Northern Ave., Hagerstown, MD 21742.

Online condolences may be made at www.rsthvn.com.
To order memorial trees or send flowers to the family in memory of Donald Robert Gossard, Sr., please visit our flower store.