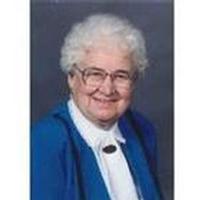 Born May 24, 1920, in Hagerstown, she was the daughter of the late Leroy and Margaret Mae (Weyant) Myers.

She is survived by her loving husband of 68 years, Melvin Foster Rozier; two daughters, Hilda R. Bender of Jacksonville, N.C., and Debra L. Cramer of Smithsburg; one sister, Ruth Miller of Waynesboro; five grandchildren; 12 great-grandchildren; and one great-great-grandchild.

In addition to her parents, she was preceded in death by four sisters and six brothers.

Friends will be received at the funeral home one hour before services.
To order memorial trees or send flowers to the family in memory of Hilda Louise Rozier, please visit our flower store.