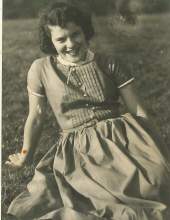 Born on July 9, 1937 in Hagerstown, Miriam was the daughter of the late William, Sr. and Dorothy (Kinzer) Hendrickson. She was also preceded in death by her sisters, Margaret Barrett and Linda Hendrickson; and brother, William Hendrickson, Jr.

Miriam attended Hagerstown High School. She worked on the switchboard at the Washington County Hospital and worked at Western Maryland Hospital until her first child was born. After her children were in school, she returned to work at Clearview Nursing Home as a Nurse's Aide.

A funeral service will be held at Rest Haven Funeral Home on Monday, April 26, 2021 at 12:00 PM. Visitors will be received at the funeral home from 10:00 AM-12:00 PM. Interment will follow at Rest Haven Cemetery. In lieu of flowers, donations can be made to Hospice of Washington County at 747 Northern Ave, Hagerstown, MD 21742.

Rest Haven Funeral Home is entrusted with arrangements.
To order memorial trees or send flowers to the family in memory of Miriam Joann Norris, please visit our flower store.