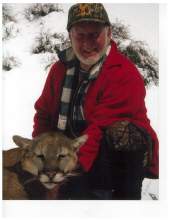 Born on December 7, 1941 at Washington County Hospital in Hagerstown, Bob was the adopted son of the late Renner and Pauline Bennett.

Bob graduated from South Hagerstown High School in 1959, and then served in the U.S. Navy from September 1959 as a Medical Corpsman until he received an honorable discharge in September 1965 and received the Good Conduct Medal (3 years active duty and 3 years in the reserves). He then attended Hagerstown Junior College which helped him earn a job at Potomac Edison as a Draftsman. He then worked at Mack Truck as a Machinist and Engine Builder and retired after 30 years.

Bob enjoyed traveling, playing cards, and all sports- particularly the Baltimore Ravens and Orioles, and University of Maryland and Penn State athletics. He enjoyed playing softball and did so for many years into his late 60's. He was an excellent pitcher and 2nd baseman. He was an avid hunter who has hunted much of the U.S., Canada, and New Zealand. Most of all, Bob was a hard-working man who loved his two daughters, two son-in-laws, five grandchildren, and 11 great-grandchildren with all his heart.

Bob suffered a massive stroke on October 1, 2019 which really took a toll on him, and after several months of inpatient care and a brief stint at home, he required way more day to day care than his family could provide, and he was placed in a personal care facility.  He spent a little over 4 months in Elmcroft of Hagerstown and then was moved to Michaux Manor in Fayetteville at his request because he wanted to be back near his home in Pennsylvania.  The family would like to thank both of these facilities for the medical care and support they provided. We are grateful for Cathy Bennett, who stayed by his side for months in the hospital and during 2 rehab facilities, as well as a few months trying to take care of him at home.  We’d also like to thank two special neighbors and friends of dad’s; Dave Kilpatrick, who was instrumental in keeping dad’s house and truck secure and in working order, and Howie Stumbaugh who also watched the house for us, delivered heating oil, and offered to do anything else we needed.  We would especially like to thank his specialized team at Grane Hospice (Tracey, Amanda, Heather, Carlena, and Adam) who has supervised his care over the last 7 weeks and allowed him to pass on his terms with dignity and comfort measures. His family is comforted by God's promise that this is not our forever home and we will see him again.

Bob is survived by his daughters, Michele (Shelli) Hammer and her husband, Douglas, of Richmond, VA; and Cheryl Ann Corbin and her husband, John, of Virginia Beach, VA. He is also survived by his grandchildren Chris Whitman (Katie) of Lewiston, ID; Zachary Byrd of Virginia Beach; Justine Clark (William) of Wilmington, NC; Jessica Byrd of Virginia Beach; and Darienne Hammer of Charlotte, NC; and his great-grandchildren, Lexus, Porscia, and Adalyn Whitman; Tristyn, Zayden, and Jaxyn Byrd; and Airlie, Adley, and Myers Clark; and Makayla and Savannah Ball.

Rest Haven Funeral Home is assisting with arrangements.
To order memorial trees or send flowers to the family in memory of Robert Eugene Bennett, please visit our flower store.