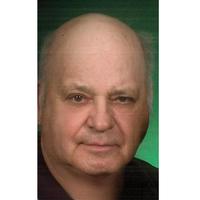 Born May 22, 1938 in Mason-Dixon, Pa., he was the son of the late Chalmer F. hampton and Olive Edna Metcalfe Hampton. In addition to his parents he also was preceded in death by three brothers.

He is survived by his wife, Joyce (Dorty) Hampton, whom he married on December 31, 1967; one son, Richard Hampton and wife Wendy of Chambersburg, Pa.; two grandchildren, Brittani Parson and husband, Justin of St. Thomas and Hunter Hampton of Chambersburg; great grandson, Paxtyn Parson and a sister, Betty Ambrose of Chambersburg.

Friends will be received at the funeral home on Friday from 7-9 P.M and on Saturday one hour prior to services.

In lieu of flowers memorial contributions may be made to St. Jude Children's Research Hospital, 501 St. Jude Place, Memphis, TN 38105.
To order memorial trees or send flowers to the family in memory of Ronald L. Hampton, please visit our flower store.