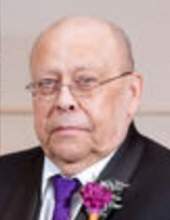 Born June 27, 1944 in Hagerstown he was the son of the late Woodrow Wilson Stoddard, Sr. and Orpha "Snook” Rhea (Harshman) Stoddard.  In addition to his parents, he was also preceded in death by his wife, Beverly Lee (Barnhart) Stoddard.

Mr. Stoddard was a CPA for most of his career and helped his parents run their bingo parlor Stoddard’s Amusements for decades, eventually taking over the family business, before retiring a few years later.

He was a US Army veteran and a proud, longtime member of the Washington County AmVets, Post 10, Hagerstown, where he served as President and Finance Officer for several years.

A graveside service will follow the visitation on Saturday at 2:00 P.M. in Rest Haven Cemetery with Pastor Kenny Brown officiating.
To order memorial trees or send flowers to the family in memory of Spencer Eugene Stoddard, please visit our flower store.