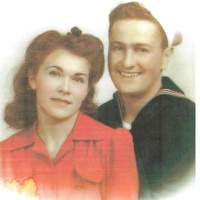 Ada G. (Robison) Cross, 95, of Hagerstown, Md., passed away peacefully on Sunday, March 10, 2019 at Coffman Nursing Home, surrounded by her family.
Ada was born July 17, 1923 in Artemas, Pa. she was daughter of the late Kelly Robison and the late Lula (Weicth) Robison.
In addition to her parents she also was preceded in death by her husband of 65 years, Elmer "Jake" Cross; daughter Patricia Ann Watts; sister Leona Crites; brothers, Carl Robison and Robert Robison and son-in-law Reverend John "Jack" Ewald.
Ada was raised in Cumberland, Md., attended Fort Hill High School and was a member of Melvin United Methodist Church.
For many years, she worked at Tri-State Discount Center, Town & Country and Woolworths. Ada and Jake moved to Hagerstown in 1999 to be closer to family.
She was a loving and giving wife, mother, grandmother and great grandmother.
She leaves a giant hole in her families lives that cannot be filled. She is survived by two daughters, Barbara Ewald and Joan Weisenmiller and husband, Charles, and son-in-law Warren Watts; grandchildren, John Ewald and wife Vicky, David Ewald, Michelle Hurwitz and husband, Mark, Keith Watts and wife Sharon, Debbie Jenkins and husband Terry, Scott Weisenmiller, Christine Eberhart and husband Brian; great grandchildren, Jacob Ewald and Jessica Flynn, Hannah Ewald and Max VanMeter, Anna Ewald, Matthew Ewald, Rebekah Hurwitz, Grace Hurwitz, Keith Watts, Jr., Steven Jenkins, Ryan Weisenmiller, Mae Weisenmiller, Nicholas Eberhart and Ethan Eberhart and many nieces and nephews.
Funeral services will be conducted on Saturday, March 16, 2019 at 1:00 P.M. at Rest Haven Funeral Home, 1601 Pennsylvania Ave., Hagerstown with Rev. Elizabeth Jackson, Rev. Warren Watts and Rev. Vicky Starnes officiating.
Friends will be received at the funeral home on Saturday one hour prior to the service from 12:00 -1:00 P.M.
The family would like to extend their love and gratitude to each and every staff member at Coffman Nursing Home for their love and care of Ada over the past four years.
She loved them all dearly and so does her family.
We will forever be grateful to them.
In lieu of flowers donations may be made in Ada's name to Coffman Nursing Home, 1304 Pennsylvania Ave., Hagerstown, MD 21742.
To order memorial trees or send flowers to the family in memory of Ada Cross, please visit our flower store.