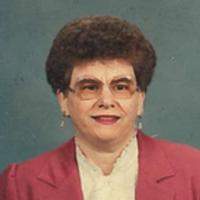 Aleda May Andrews, 74, of Greencastle, passed away on Saturday, October 24, 2015 at Chambersburg Manor Care.

Born August 19, 1941 in Washington County, Maryland, she was the loving daughter of the late Earl R. Andrews, Sr. and Nellie M. (Stouffer) Andrews.

Aleda was a 1959 graduate of Hagerstown High School.

She was a former member of Grace United Methodist Church in Hagerstown.

She enjoyed working in the flower bed and keeping busy.

She is survived by her sister, Ana V. Benedict; a brother, William L. Andrews and his wife Ella; and her nephew and caregiver, Howard L. Bingaman and wife Patricia.

In addition to her parents, she was also preceded in death by her brother, Earl R. Andrews, Jr. and his wife Shirley; a brother-in-law, Welty F. Benedict; and her sister-in-law, Mary Lee Andrews.

A graveside service will be conducted at 2:00pm on Friday, October 30, 2015 in Rest Haven Cemetery, 1601 Pennsylvania Ave., Hagerstown. Burial will follow.
To order memorial trees or send flowers to the family in memory of Aleda May Andrews, please visit our flower store.