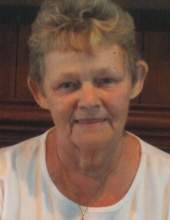 Born April 4, 1937 in Hagerstown she was the daughter of the late, Charles and Mary (Dean) McCarney. In addition to her parents she also was preceded in death by her loving husband of 63 years, James W. "Jim" Manford, Sr.; two sons James W. Manford, Jr. and Lewis E. Manford; three siblings, Robert "Bob" Curry, Jack Curry and Gloria "Sis" Burkett.

Mrs. Manford had worked as a waitress and as a ribbon and die cutter for Maryland Ribbon, she also had worked for Roper Eastern and in the warehouse for Walmart.

Friends will be received at the funeral home on Friday from 6-8 P.M.

In lieu of flowers memorial contributions may be made in Alice's name to the Humane Society of Washington County, 13011 Maugansville Rd., Hagerstown, MD 21740
To order memorial trees or send flowers to the family in memory of Alice Arlene Manford, please visit our flower store.