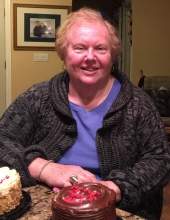 Born on April 16, 1942, in Hagerstown, Maryland, she was the daughter of the late John and Rachel Buchanan.

She graduated from North Hagerstown High School in 1960.

Barbara worked for 40 years with the United States District Court in Washington, D.C. before retiring. She was also a member of the VFW Auxiliary in Hagerstown, Maryland.

She enjoyed preparing meals for and spending time with her beloved family.

In addition to her parents, Barbara was preceded in death by her son, Christopher Hall and her sister, Nancy Owen.

A graveside service will be held on Saturday, November 6, 2021, at 12:00 PM at Rest Haven Funeral Home, 1601 Pennsylvania Avenue, Hagerstown, Maryland 21742. A visitation will be held at the funeral home one hour prior to the service.
To order memorial trees or send flowers to the family in memory of Barbara Ann Hall, please visit our flower store.