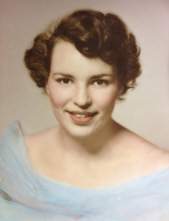 Born May 30, 1936 in Pittsburgh, PA, she was the daughter of the late Roy A. and Margaret (Kunkle) Gilliland.

Barbara was a 1954 graduate of Mt. Lebanon High School in Pittsburgh, and a 1958 graduate of the University of Pennsylvania, earning her Bachelor’s Degree in Nursing. During her time at Penn, she was also a member of Alpha Omicron PI sorority.

After her marriage to Stanley, Barbara became a full-time homemaker. She was a Den Mother for Pack 36 of Halfway, MD and a member of both The Women’s Club and Beta Sigma Phi.

Barbara was a loving and dedicated wife, mother and grandmother who supported her family in all of their endeavors. She enjoyed family time, reading, gardening, traveling, corresponding with family and friends, and dressing up for any special occasion.

In addition to her parents and husband, she was preceded in death by an infant son, Robert; her sister Dorothy G. Miller; and her brother, Roy A. Gilliland, Jr.

In lieu of flowers, donations may be made in Barbara’s name to Coffman’s Nursing Home, 1304 Pennsylvania, Ave., Hagerstown, MD 21742; or to The Women’s Club, 31 South Prospect St., Hagerstown, MD 21740.
To order memorial trees or send flowers to the family in memory of Barbara Gilliland Johnson, please visit our flower store.