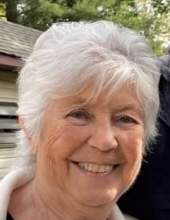 Born May 4, 1945 in Hagerstown, Md. she was the daughter of the late, Eugene Lee Wolford and Doris Elaine McConnell. In addition to her parents she also was preceded in death by her grandmother who raised her, Virginia Valentine and a half brother, David Wolford.

Mrs. O'Connor was a 1963 graduate of North Hagerstown High School. She had worked as a EMT with Community Rescue Service for many years; an assistant with Dr. Gerald Falke; a unit clerk with Washington County Hospital and as an administrative assistant with Urgent Care.

Friends will be received at the funeral home on Thursday from 6-8 P.M. and on Friday one hour prior to the service.
To order memorial trees or send flowers to the family in memory of Barbara Jean (Darr) O'Connor, please visit our flower store.