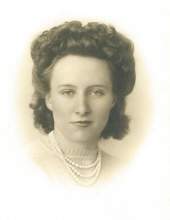 Born September 11, 1924 in Madison, Nebraska she was the daughter of the late, James C. and Effie (Spencer) Young. In addition to her parents she also was preceded in death by her husband of 56 years, Thurman B. Shank, Sr. whom she married, June 4, 1943; a son, Thurman B. Shank, Jr. and five brothers and three sisters.

Mrs. Shank was a 1942 graduate of Boonsboro High School. She was a member of St. Pauls Lutheran Church Myersville, Md. and enjoyed working in her yard, puzzles, sewing and crocheting.

She retired as a service manager for Hoffman Chevrolet, Hagerstown and previously had worked as a cabinet builder for Fleetwood Manufacturing and as a seamstress for Londontown manufacturing.

Graveside services will be private and held at the convenience of the family.

Rest Haven Funeral Home, Hagerstown is assisting the family with the arrangements.
To order memorial trees or send flowers to the family in memory of Bonita Lavon Shank, please visit our flower store.