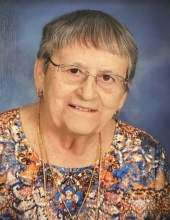 Brigitta Elisabeth (nee Peuser) Puthawala, age 91, of Hagerstown, MD passed away quietly on November 10, 2021, at home surrounded by her family after a long illness. Born on October 22, 1930 in Berlin, Germany, she was the daughter of Arthur Andres Peuser and Herther Eva (nee Kargauer) Peuser.

Brigitta was raised in Berlin during WWII and saw much of history unfold firsthand. This experience impacted her greatly throughout her life. Following high school (abitur) she worked in accounting at C&A Brenning Meyer Department Store. She met her future husband, Gulam Rasul Puthawala, in 1955. They were married in India on December 7, 1957 and started their family. In 1963, violent religious conflicts caused the family to flee to Germany, then England, and finally immigrate to America in 1965. They eventually settled in Hagerstown, where Brigitta stayed home and raised her two children. For many years, Brigitta also volunteered at the Washington County Hospital cafeteria and at the St. Ann’s Catholic Church office.

Brigitta, who was affectionately known as “Oma,” was a devout Catholic, lover of knowledge, amazing cook/baker, and world traveler. She enjoyed landscaping and gardening, designing furniture, and spending time in the company of friends and animals. If you had to sum her life up in one word, it would be “survivor”. She survived Rickett’s, WWII, fleeing to America, chronic illnesses, and 5 years without her beloved husband, who died on December 23, 2015.

The family wishes to thank the staff at the various home health agencies for the care they provided to Brigitta in her home in her final years. The family also wishes to thank Eva and Joe Wishard and the many doctors, nurses, and medical staff who cared for her throughout the years. Their dedication and support allowed Oma to live a full life to the very end.

A celebration of Brigitta’s life will be held on November 22, 2021, at 10:00 am at St. Ann’s Catholic Church on 1525 Oak Hill Avenue, Hagerstown, MD with visitation with the family beginning at 9:00 am. Internment at Rest Haven Cemetery in Hagerstown, MD following the mass. In lieu of flowers, contributions in her memory may be made to St. Ann’s Catholic Church or a charity of your choice.
To order memorial trees or send flowers to the family in memory of Brigitta Elisabeth Puthawala, please visit our flower store.