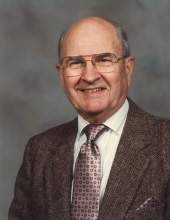 Born in Hagerstown, MD, he was the son of the late Wilford J. "Bill" Dean and Grace Clopper Dean.

He graduated from Hagerstown High School in 1935. He later attended several semesters at University of North Carolina for Commercial Organization Secretaries and served as Secretary/Manager of the Hagerstown/Washington County Chamber of Commerce.

He served in World War II as a 1st Lt. in the 43rd Infantry Division as Transportation Officer and Graves Registration Officer. He served three years in the Southwest Pacific and was awarded the Bronze Star for gallantry in the Philippines invasion. After the war he was president of the local Chamber of Commerce, and served on many service organizations.

He was a 75 year member of Friendship Lodge #84 AF & AM. He was a Charter member of Haven Lutheran Church, serving as Sunday School teacher, choir member, and councilman. He served on the Advisory Board for the first Hagerstown Junior College. He was Past President of the Suburban Kiwanis Club, the SCORE Chapter, the CCSC prison ministry organization, the Washington County Commission on Aging, and the Hagerstown City Planning and Zoning Commission. He served as an instructor for the AARP Driving Program for Seniors. He was a member of the Maryland State Senior Citizens Hall of Fame and received the Governor McKeldon Proclamation for Volunteerism. His hobby was the restoration of an antique 1934 Seagraves fire engine.

Bob is survived by three sons, C.Robert "Bob" Dean, Jr., of Hagerstown, John David Dean of Hagerstown, and William Timothy Dean of Williamsport, MD; six grandchildren, and eight great-grandchildren. He was preceded in death by his wife of 75 years, Vivian M. Dean, and his sister, Jane Elise Dean.

Funeral services and internment will be held privately at Rest Haven Funeral Home and Cemetery at the convenience of the family. A celebration of life will be held at a future date. In lieu of flowers, memorial donations may be made to Haven Lutheran Church, 1035 Haven Road, Hagerstown, MD 21742.

The Dean Family would like to thank Homewood of Williamsport for the loving care they provided Bob.

Online condolences can be made at www.rsthvn.com.
To order memorial trees or send flowers to the family in memory of C. Robert Dean, please visit our flower store.