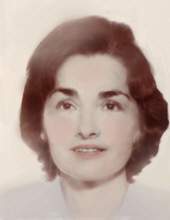 Carol I. (Maria Spiry) Fuller, of Chambersburg, PA, passed away peacefully on September 28, 2021.  She was nearly 95 years old.

Carol was born November 7, 1926 in Hamburg Germany.  She grew up in and around Zweibrucken, Germany.

Carol married Donald Clyde Fuller and the two embarked on a military career that had them traveling around the world with their 2 sons Roland and Randolph.  They were stationed many times in different US locations as well as overseas in Japan and 3 times in Germany.

When times were tough, Carol (being a wonderful seamstress) would sew her own outfits, as well as whatever the boys needed.  It was during this time that she and Don took in foster babies and the children always left with her beautifully made baby clothing and blankets!

Among her other creative talents, Carol loved to paint with oils and was magnificent at crocheting everything from dish rags to giant afghans.  Her needlepoint included gorgeous chairs and pillows and framed wall hangings of all sorts, decorating every beautiful home they lived in.

Another joy in her life was her fabulous cooking and baking!  Her home was  always filled with delicious smells and the sound of knitting needles and crocheting hooks.

Perhaps most important to Carol was her love for animals.  Her homes were always filled with several dogs and or cats that needed help!  She gave them unconditional love and received the same.

Carol was also an avid reader of so many subjects.  Reading for pleasure about far away places and for knowledge to quench her curiosity!

She was preceded by her husband, Lt Col Donald Clyde Fuller and her eldest son, Roland Donald Fuller.

Being a spiritual woman, Carol is now resting in God’s arms.

Carol is survived by her youngest son, Randolph Charles Fuller and
daughter-in-law Clia.  Also her 3 grandchildren, and 4 great grandchildren.

Online condolences can be made at www.rsthvn.com.
To order memorial trees or send flowers to the family in memory of Carol I. Fuller, please visit our flower store.