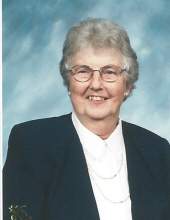 Born September 30, 1927 in Hagerstown she was the daughter of the late, Harry and Cora (Hull) Hastings. In addition to her parents she also was preceded in death by her husband of over 40 years, Charles William Uzelac and two brothers, Ralph and Earl Hastings.

In addition to being a wife mother and homemaker she also had worked as an assistant cook for the Washington County Schools and an assembler for the Gabriel Toy Company, Hagerstown.

Mrs. Uzelac was an active member of Shiloh United Methodist Church where she belonged to the Nellie Lytton Sunday School Class, sang in the choir and served as Communion Steward.

She enjoyed drawing and painting, especially birds and loved cooking and crocheting.

A graveside service will be conducted on Wednesday, October 14, 2020 at 2:00 P.M. at Rest Haven Cemetery, 1601 Pennsylvania Ave., Hagerstown, with Rev. Dionne Hall officiating.

Due to the current Covid-19 restrictions the family will hold a memorial service at a later date.

Rest Haven Funeral Home, Hagerstown is assisting the family with the arrangements.
To order memorial trees or send flowers to the family in memory of Catherine Louise Uzelac, please visit our flower store.