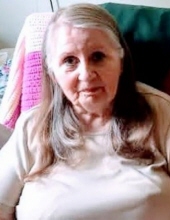 Born on August 30, 1945 in Hagerstown, she was the daughter of the late Evelyn (Truax) and Lloyd Mills. She was preceded in death by her husband, Paul Crothers, who passed in 1977.

Catherine was a homemaker, and for the last chapter of her life was a resident at Quincy Village in Waynesboro, PA.

She is survived by one daughter; Rhonda Basta, Five Grandchildren; Alexis, Amanda, Andrea, Nicholas and Lillie, and one Great Granddaughter; Willow.

Funeral Services will be private and at the convenience of the family.

In lieu of flowers, memorial contributions can be made in Catherine's name to the Humane Society of Washington County, 13011 Maugansville Rd., Hagerstown, MD 21740.

Rest Haven Funeral Home, Hagerstown is assisting with the arrangements.

"For God so loved the world that he gave his one and only Son, that whoever believes in him shall not perish but have eternal life.For God did not send his Son into the world to condemn the world, but to save the world through him." - John 3:16-17
To order memorial trees or send flowers to the family in memory of Catherine Mae Crothers, please visit our flower store.