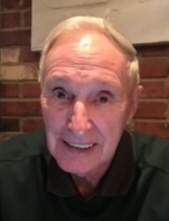 Born September 3, 1935 in Eglon, WV, he was the son of Herman and Bessie (Henline) Beckman. He was known as "Smokey" in his youth and was a talented all-star athlete. He married his high school sweetheart, Sally, in 1954 and several years later enlisted in the U.S. Army. He served honorably and received many commendations, including 2 Bronze Service Stars, before retiring in 1988 after 33 years of service to his country.

He had multiple interests but his passion was playing golf. Known as Charlie in adulthood, he could be found on the golf course 2-3 times a week. Anyone who knew him knew that he was a truly caring man. He loved his wife, children and grandchildren, community and his country.

Charles will be greatly missed by his family, neighbors, and golf buddies at the Greencastle Golf Club.

Funeral services will be private and held at the convenience of the family.

Online condolences can be made at www.rsthvn.com.
To order memorial trees or send flowers to the family in memory of Charles Howard Beckman, please visit our flower store.