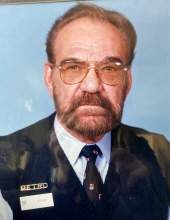 Born February 23, 1939 in Kempton, Md. he was the son of the late, Tony F. Scripp, Sr. and Mary Y. (Kuhn) Scripp. In addition to his parents he also was preceded in death by three sisters, Sandy Huffman Bennett and infants, Karen and Betty Zane Scripp

Kit served in the United States Army before beginning a 41 year career with WMATA (DC Metro) earning the distinction of being named employee of the year in 2001.

Kit was a member of the Mt. Storm Presbyterian Church.

At his request Kit donated his body to the WVU Gifts Registry.

A Celebration of Life service will be conducted on Saturday, January 30, 2021 at 2:00 P.M. at the Bayard Church of God with Pastor Joey Thomas officiating.
To order memorial trees or send flowers to the family in memory of Christopher Scripp, please visit our flower store.