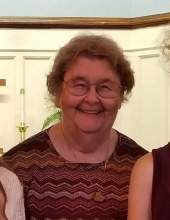 Clara May Frey, 83, of Hagerstown, passed away, Wednesday, April 29 at Meritus Medical Center.

A long time farmer's wife, Clara was an active member of Shiloh United Methodist Church, serving as Choir Director, Organist, and Rainbow Choir Director. She was also a member of the Nellie Lytton Sunday School Class and a member of the Washington County Ag Expo and Fair. In her spare time, Clara enjoyed embroidery. Nothing was more important to Clara than family and they meant everything to her. She also worked as an In-Home Nanny where she cared for children as if they were her own grandchildren.

Private graveside services will be conducted at Rest Haven Cemetery, Hagerstown with Pastor Dionne Hall officiating. A Celebration of Life will be scheduled at a later date.

In lieu of flowers, donations can be made to Shiloh United Methodist Church.

Rest Haven Funeral Home, Hagerstown is assisting the family with the arrangements.
To order memorial trees or send flowers to the family in memory of Clara May Frey, please visit our flower store.