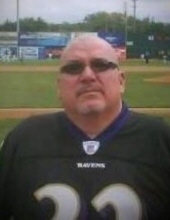 Clarence "Ace" Nixon Davis, 61, of Hagerstown, passed away suddenly at Meritus Medical Center on Wednesday, May 19, 2021.

Ace was an honorary member of First Baptist Church of Westernport.

His presence lit up a room and soon filled it with laughter. We are blessed for the time we had with him. No doubt, he has them laughing in Heaven.

In lieu of flowers, memorial contributions can be made to the National Multiple Sclerosis Society, 1800 M Street NW, Suite B50 North, Washington, DC 20036.
To order memorial trees or send flowers to the family in memory of Clarence "Ace" Nixon Davis, please visit our flower store.