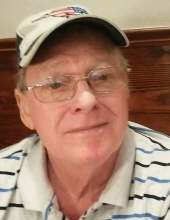 Born on September 22, 1944 in Leitersburg, Danny was the son of the late Earl Calvin and Virginia Doris (Stover) Kline. He is also preceded in death by his wife of 46 years, Alice Marie Kline; as well as his daughters, Joann Kline and Denise Kline; and his brother, Darryl Kline.

A visitation will take place at Rest Haven Funeral home on Thursday, October 8, 2020 from 6:00 PM-8:00PM. A funeral service will take place on Friday, October 9, 2020 at Rest Haven Funeral Home at 12:00 PM with Pastor Darell Gentry officiating. In lieu of flowers, donations can be made in Daniel's name to Waynesboro Bible Church Van Fund at 8216 Stottlemyer Road, Waynesboro, PA 17268; or to the Humane Society of Washington County at 13011 Maugansville Road, Hagerstown, MD 21740.

Rest Haven Funeral Home is assisting the family with arrangements.
To order memorial trees or send flowers to the family in memory of Daniel "Danny" Franklin Kline, please visit our flower store.