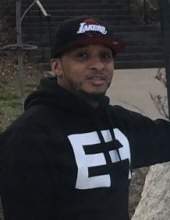 Darryl was self-employed and worked as a barber.

He loved sports, especially the San Francisco 49ers. He also loved playing video games with his friends and family.

Darryl was a family man, he was a loving individual who was loved by everyone. He was a brother, a cousin, a nephew, an uncle, a grandson, a God father, and a devoted father to his two boys.

Friends will be received at the funeral home two hours prior to the service.
To order memorial trees or send flowers to the family in memory of Darryl "DJ" Xavier Talley, Jr., please visit our flower store.