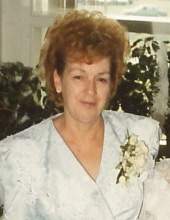 Born February 24, 1938 in Hagerstown she was the daughter of the late, Kelly Gilmore Reed I and Wanda Olivia (Nokes) Reed. In addition to her parents she also was preceded in death by a daughter, Kimberly Diane Nigh; two sisters, Delores Vincent and Deanna Plotner and one brother, William Kelly Reed.

Dolly was a homemaker and enjoyed deer hunting, shopping, watching ice skating and attending her granddaughters dance recitals. She also was an avid supporter of President Donald Trump.

Friends will be received at the funeral home on Thursday from 6-8 P.M.

In lieu of flowers memorial contributions may be made in Dolly's name to Polycystic Kidney Disease (PKD) Foundation, P.O.Box 871847, Kansas City, MO 64187 or to the Clear Spring Fire and Ambulance Company, 30 Mulberry St. P.O.Box 400, Clear Spring, MD 21722.
To order memorial trees or send flowers to the family in memory of Dolly Yvonne Reed, please visit our flower store.