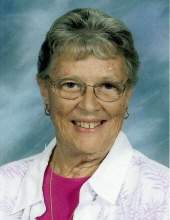 Elinor Jeanette Smith, 92, passed away March 7, 2022. She will be greatly missed by her children.
Elinor was born Oct. 2, 1929 in Hancock, Md. to Norman C. and Louise S. (Hoffman) Klipp. Elinor attended Hagerstown High School,Class of 1948.

On April 25, 1948, Elinor began her 57 years of marriage to Kenneth W. Smith in Chewsville, Md. Her early married years were spent raising their daughters, Geraldine M. (Smith) Cripe and Susan J. Smith-Taylor and teaching them about service to others.

Elinor loved her family, her church and helping others. She was a devoted member of Bethel United Methodist Church, singing on the choir and teaching summer Children’s Bible School. Elinor and Ken later became members of Otterbein U.M. Church where she was very active in the United Methodist Women in Mission. She and her husband worked through Volunteers in Mission for the United Methodist Church to repair homes churches and schools in Red Bird Mission, Ky., Jamaica, Puerto Rico and clean up in Florida after Hurricane Andrew.

In 1973, Elinor and Ken moved to Naples, Florida, for about 15 years where Elinor began a successful window treatment business. Upon Ken’s retirement they returned to Hagerstown and continued Elinor’s business.

After Ken’s death, Elinor lived in Hagerstown until 2012 when she and her daughter Susan and son-in-law Barry L. Taylor moved to Pensacola, Florida where they were neighbors of daughter Geraldine and son-in-law Claude (Rick) Cripe. Elinor’s happiest times in Pensacola were at the beach and in the city’s senior dance groups doing the polka or ballroom dances with friends, or encouraging her church to mission trips to Red Bird Mission, Ky.

Visitation will be from 9:00 A.M. to 11:00 A.M. prior to the funeral service on March 26, 2022 at Rest Haven Funeral Home, 1601 Pennsylvania Ave., Hagerstown, MD address. The Rev. Dr. Stephen D. Robison shall officiate and burial will be in Rest Haven Cemetery, Hagerstown. In lieu of flowers, the family suggests memorial contributions be made to United Women in Faith (formerly United Methodist Women) at https://uwfaith.org.

To order memorial trees or send flowers to the family in memory of Elinor Jeanette Smith, please visit our flower store.