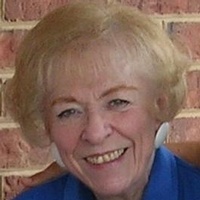 Emma Rose D'Amico, "Grandma Sweetie", passed away peacefully in her home at Brookdale Senior Living Center on March 1. Born Emma Basile in 1921 in Brooklyn NY., she was one of 6 girls and one boy. Emma married Louis J. D'Amico in 1943, and soon after had their first child while he was serving in the Navy during the war in the South Pacific. Upon his return home they together ran a dress making factory in the fashion district of New York City. Lou preceded her in death in 2001.

Emma is survived by two living children, Maxine M. Nussear and her husband Phil, and Richard A. D'Amico of Nantwich England and his wife Jacqui. She was preceded in death by son Joseph Louis in 1989.
Emma's 6 grandchildren include Philip G. Nussear, Jr. and wife Elizabeth, David L. Nussear and wife Debra, both of Nashville, Tenn., Dr. Thomas M. Nussear and wife MaryAnn of Hagerstown, Brian P. Nussear and wife Kaylor of Brunswick, Md., Anthony D'Amico and wife Lottie of Nantwich England, and Alessandra Rose D'Amico of Nantwich. She also has 10 living great grandchildren; Jordan, Camden, Katie, Cole, Michael, Will, Avery, Jake, Graham, and Lily.
A Catholic Mass will be celebrated at St. Mary Catholic Church on Friday at 11:00 am., Father George Limmer will be presiding. A private burial will be held at a later time at Rest Haven Cemetery.
The family asked that in lieu of flowers, donations be made to St. Mary Catholic Church, and/or Hospice of Washington County.
To order memorial trees or send flowers to the family in memory of Emma D'Amico, please visit our flower store.