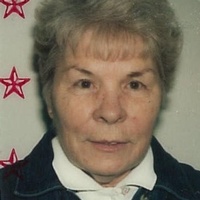 Emma May Plummer peacefully passed away at Coffman Nursing Home on Sunday, Nov. 4, 2018.

She was a dedicated loving wife and mother, always putting her family first. Her love of children inspired her to volunteer her time as a Sunday school teacher, a softball coach, and a Brownie and Girl Scout leader. All the neighborhood kids knew she was there for them; they knew her house was their house too. Her grandchildren were her pride and joy, known to them as Granny; and as one of her grandchildren exclaimed to a playmate, "She's old but frisky!" Her kitchen was always open.

Many in the community remembers her as the branch manager of the Hagerstown Trust, the South End. She loved her job, the customers she met, and the people who worked with her. Giving her loyalty equally to those with the most to those with the least, all were given the best service she could provide.

She is also survived by her family at Coffman Nursing Home; the place she called home and was so lovingly cared for the last five years. They became her family too.

Friends will be received one hour prior to service time at the funeral home.

Contributions in her memory may be made to Coffman Nursing Home, 1304 Pennsylvania Avenue, Hagerstown, MD or Hospice of Washington County, 747 Northern Avenue, Hagerstown, MD.
To order memorial trees or send flowers to the family in memory of Emma May Plummer, please visit our flower store.