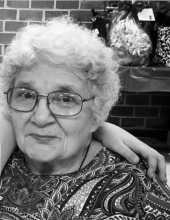 Born December 25, 1928 in Funkstown, Md. she was the daughter of the late, Charles Miller and Carrie (Stockman) Miller Shepherd. In addition to her parents she also was preceded in death by her husband, Elwood M. Moser; three brothers, Charles, Hartle and Jackie Miller; one sister, Doris Sheldon and a half brother, Richard "Buck" Miller.

In addition to being a homemaker she also worked for over 30 years as a waitress at the Majestic Restaurant, Hagerstown.

Friends will be received at the funeral home one hour prior to the service.

In lieu of flowers memorial contributions may be made in Fay's name to Hospice of Washington County, 747 Northern Ave., Hagerstown, MD 21742.
To order memorial trees or send flowers to the family in memory of Fannie May "Fay" Moser, please visit our flower store.