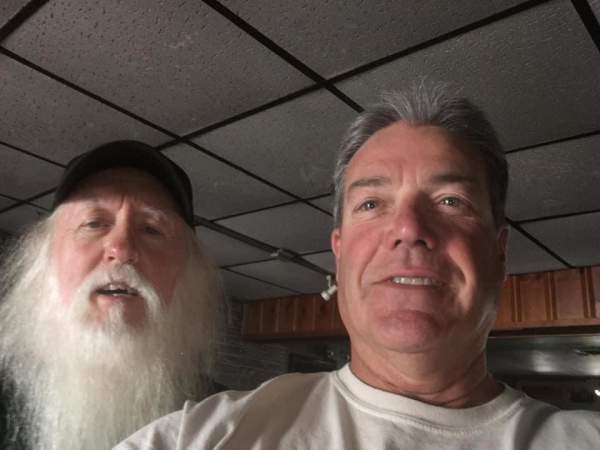 Gary “Pappy” Boward, 70, of Clear Spring, MD passed away due to kidney complications on
Saturday, April 17, 2020 at Meritus Medical Center with his devoted wife and daughters by his side.

Born May 23, 1949 in Hagerstown, MD, he was the son of the late Robert W. Boward and
Charlotte Marie (Sparks) Boward. Gary was also preceded in death by his daughter, Trista
(Boward) Kruse and his mother in law Donna Flora.

Gary graduated Smithsburg High School in 1967 with a basketball scholarship and chose to stay in the area to go to Hagerstown Community College graduating in 1969 with his Associates degree. He worked for MJ Grove, then from 1971-2002 he worked and retired as a Master electrician at Eastalco in Frederick, MD where he also diligently advocated for employees rights and safety with the Steelworkers Union.

Though he was no doctor, he helped save the lives of countless people through his compassionate dedication to help the next person overcome addictions. Keeping his link strong to embrace and mentor whomever asked his help, achieving his own 30 years of sobriety on April 16, 2020. In those 30 years, his passion to help the next person extended throughout the AA community with weekly meetings as well as donating his time as a speaker at Mountain Manor Treatment Center in Emmitsburg MD.

Gary was passionate about motorcycle safety and rights, and became affectionately known deeply in the motorcycle and political community as “Pappy” He joined ABATE in its beginning years after seeing an upcoming event posted. Before he even went, and after talking to the, then, State Director, he was appointed to be the Washington County Coordinator and the rest is history. He became the State Director in 1995 for several years. Then he became the Chairman of the Board of Advisors of Past Directors, returning again to the position of State Director when needed, He devoted years of his life with ABATE, supporting the rights of motorcyclists in Maryland, from keeping the usage of helmets voluntary and then the fight to return to that freedom of choice, watching over all legislation that impacted motorcycling, including the Maryland Motorcycle Safety Program, understanding that educated riders were better riders. ABATE , the need for public awareness of motorcycles, opposing discrimination against riders, as individuals and as members of organized groups. He developed lifelong relations with members of The House of Delegates, State Senate, several Governors and many State Agencies, including the Motor Vehicle Administration (MVA). Along with our members, you could see him walking the halls of the House and Senate and everyone knew him.

It may have been his height or his beard, but mostly, it was his smile. He didn’t talk, he communicated. And people listened. He would be at meetings of other groups, such as, the Motorcycle Riders Foundation, protecting our rights on the federal level and the National Coalition of Motorcyclists, which assisted state motorcycle rights organizations, and many more. While the purpose of ABATE of Maryland was to watch over and support rider education and public awareness, he also understood the importance of supporting legislators that supported motorcycling, he created the Maryland Motorcycle Riders Public Action Committee (MMRPAC) allowing contributions to their fundraisers.

As much as he did on the legislative side, he was always seen at riding events, near the ABATE table if we had one, riding up front in the Helmet Protest Rides to Annapolis, the annual Cumberland weekend, the International Motorcycle Shows, Pappy was also involved with activities outside of ABATE, supporting the Maryland Toy Runs, NHTSA and the Hagerstown Sheriff's Department’s Bikers and Badges and The Fast Track Program.

Among his passions he was also a talented and accomplished musician and vocalist, playing keyboards and in his earlier years he played rhythm guitar in several bands from the 60’s to 2020. Among them; Orange Corner, LEJ, Lil Rascals, The Goldensounds, Frosted Ice, and Skyrock which transitioned into Shadowfax in 1978 who then regrouped in 2009. Then most currently rocked our souls in Blindcide of Hagerstown, MD.

Among his passions, he was known for random acts of kindness, and genuinely enjoyed helping family, friends, neighbors and strangers. Gary knew no strangers and was beloved by all leaving a legacy of countless loved ones behind.

Due to the COVID-19 restrictions and to safely allow family and friends to pay respects, a drive thru viewing will take place Saturday April 25 from 10 AM to 8 PM in front of Rest Haven Funeral Home, 1601 Pennsylvania Ave., Hagerstown MD. There will be no parking.

Though this pandemic is holding our country hostage, when restrictions are lifted and our safety assured, we hope you will join us for a proper Gary “Pappy” celebration of life ride and picnic to be announced via the Rest Haven Website.
To order memorial trees or send flowers to the family in memory of Gary "Pappy" Boward, please visit our flower store.