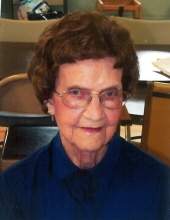 Harriett Elizabeth Clopper, 99, of Hagerstown, passed away at home surrounded by family on Sunday, December 13, 2020.

Born on December 25, 1920, Harriett was the daughter of the late Charles Richard and Martha Elizabeth (Bartles) Rowland. She is also predeceased by her husband of 41 years,Donald Edward Clopper; her son, Gary Clopper; her sister, Patricia Spickler; and her brother, Joseph Rowland.

Harriett was an active member of St. Mary's Parish. She enjoyed reading, NASCAR Racing, spending time with her grandchildren, and watching Wheel of Fortune and Jeopardy.

Harriett is survived by her children, Donald R. Clopper, Marianne Rines, and Edward Clopper; and her sister, Mary Lee Munson. She is also survived by ten grandchildren and 12 great grandchildren.

Services are private and at the convenience of the family. In lieu of flowers, donations can be made to Hospice of Washington County at 747 Northern Avenue, Hagerstown, MD 21742.

Rest Haven Funeral Home is entrusted with the arrangements.
To order memorial trees or send flowers to the family in memory of Harriett Elizabeth Clopper, please visit our flower store.