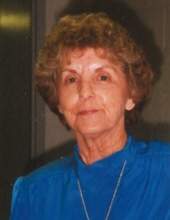 She was born on January 4, 1930, in Pinesburg, MD and was the daughter of the late Jacob E and Grace A Mentzer Teach.

Helen was a 1948 graduate of Williamsport High School and worked her early years at Commercial Credit and Fairchild Aircraft. She was also an accomplished seamstress and taught several sewing classes at HCC.

She was married December 16, 1950, to the late C William Ridenour who passed away January 19, 2008. They enjoyed over 57 years together and spent many happy winters in Florida throughout their retirement years.

In addition to her parents and husband, she was predeceased by brothers Robert L Teach, Evan F Teach, and sister Naomi L Teach Keller.

Graveside services will be private and held at the convenience of the family. A memorial service will be held at a later date.

In lieu of flowers, memorial contributions may be made to Trinity Lutheran Church, 15 Randolph Avenue, Hagerstown, MD 21740, where Helen was a member for many decades.

Rest Haven Funeral Home of Hagerstown is assisting the family with arrangements.
To order memorial trees or send flowers to the family in memory of Helen K. Teach Ridenour, please visit our flower store.