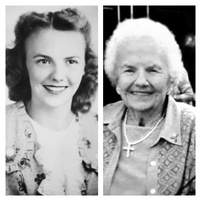 Helen Louise Stallings Kershner, 100, died from natural causes February 24, 2019 at Sundale Nursing Home, Morgantown, West Virginia.
She was born in Baltimore, Maryland February 5, 1919 to Edward L. and Hattie Blair Stallings. She married Wayne "Pic" Kershner April 6, 1940. She was preceded in death by her husband in 1992, daughter-in-law Sandy Kershner, and all of her siblings: brothers Blair Lee Stallings and James B. Stallings, and sisters Alice M. Douglas, Thelma G. Suffecool, and Ruth E. Turner.
She is survived by sons Jeffrey Lynn "Corky" Kershner (Cheryl Brown), with whom she made her home until December, and Gary Wayne Kershner; grandchildren Gary Wayne Kershner II (Renee Viar), Leighanne (Derek) Spink, Donovan Kershner (Amanda Osborne), Justin (Anne) Kershner, Cody (Melissa) Kershner, Suzette Taylor; great-grandchildren Gary Wayne Kershner III, Conner Spink, Hali, Taylor, Anna Katie, Vinnie, Allie, Logan, Kyleigh, Tanner, Miles, and Harper Kershner, Montana (Andrew) Boggess, Sage and Madelyn Rowland; great-great-grandchildren Brooklyn Boggess and Blake Elmore; and nieces and nephews.
Helen lived the majority of her life at 29 Haywood Circle in Funkstown, Maryland, except for time spent in Corpus Christi, Texas when her husband was stationed there in the Navy during World War II. She moved to Morgantown WV in 2016.
Helen worked in Hagerstown, MD at Fairchild Aircraft for a brief time and for Sam Turner Decorating where she was a drapery seamstress until her retirement. She regularly enjoyed playing cards and going to bingo with friends, and she took great pride in her beautiful flower gardens. Above all she enjoyed spending time with her family to whom she was a loving and generous mother, grandmother, and great-grandmother. One of her favorite times was the Kershner Crab Feed family reunion held annually at Haywood Circle. Helen was a sweet and gentle soul who will be deeply missed.
The family would like to thank the loving staff of Morgantown and Amedisys Hospice Care and Sundale Nursing Home who took great care of Helen during her last months.
Cremation services provided by Rest Haven Funeral Home, Hagerstown, MD. Interment will take place at Rest Haven Cemetery in Hagerstown, MD the morning of May 18, followed at noon by a celebration of Helens life at Hub City Vineyard Church, 17805 Oak Ridge Dr., Hagerstown, MD. In lieu of flowers please donate to a charity of your choosing.

Memorial Service:
Saturday, May 18, 2019 11:00 AM
To order memorial trees or send flowers to the family in memory of Helen L. Kershner, please visit our flower store.