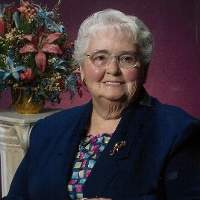 Helen May Burger, 88, of Hagerstown, passed away, Thursday, July 18, 2019 at her home, surrounded by her loving family.
Born October 30, 1930 in Hagerstown she was the daughter of the late, George A. and Naomi E. (Forrest) Rankin. In addition to her parents she also was preceded in death by her sister, Betty Jane Beard; a nephew, Ronald Turner; her daughter in law, Liz Burger and her former husband, Elmer F. Burger, Jr.
Mrs. Burger had worked as a film assembler for 16 years with Double Day Publishers and retired from Hagerstown Bookbinding in 1992.
She was a member of Christ Reformed Church, Hagerstown.
Mrs. Burgers favorite pastime was traveling with her family and friends.
She is survived by two sons, Richard F. Burger and wife, Charlotte of Hagerstown and Steven W. Burger of Woodstock, Va.; two nieces, Linda Dawson and husband, Leonard of Hagerstown, Sherry Mauk and husband, Michael of Boonsboro; a nephew George Redmond and wife Pat of Little River, SC; her late nephews wife, Donna Turner; four grandchildren; numerous great grandchildren, great nieces and great nephews.
Funeral services will be conducted on Monday, July 22, 2019 at 11:00 A.M. at Rest Haven Funeral Home, 1601 Pennsylvania Ave., Hagerstown with Pastor Greg Hodges officiating.
Friends will be received at the funeral home on Monday one hour prior to the service.
Interment will be private in Rest Haven Cemetery and held at the convenience of the family.
In lieu of flowers memorial contributions may be made to Hospice of Washington County, 747 Northern Ave., Hagerstown, MD 21742.
To order memorial trees or send flowers to the family in memory of Helen May Burger, please visit our flower store.