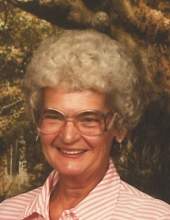 Hilda Louise (Rohrer) Shoop, 95 years young, left this earth to meet her Heavenly Father on December 9, 2020. She was a member of Black Rock Bible Church.

Hilda was born October 1, 1925 . She is survived by one daughter, Dee (Shoop) Wolf and husband Ron Wolf of Indiana; four grandsons, Mark Shoop, Darin Shoop, Tony Wolf and wife Laura, and Brian Bell and fiancee Karen Riley; as well as fifteen great grandchildren. She was also survived by a very special cousin and best friend, Pam Johnston. Hilda made her home with her youngest grandson, Brian Bell.

A graveside service will be held on Friday, December 18 at 11:00 AM. In lieu of flowers, donations can be made to Hospice of Washington County at 747 Northern Avenue, Hagerstown, MD 21742.

Rest Haven Funeral Home is entrusted with arrangements.
To order memorial trees or send flowers to the family in memory of Hilda Louise Shoop, please visit our flower store.