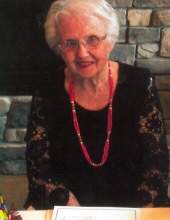 Hildegard (Hedi) Annemarie (Heyse) Saylor, 94, passed peacefully of natural causes on December 6, 2021 at Robinwood Assisted Living in Hagerstown. Born August 29, 1927 in Stargard i/Pommern, Germany, she was the youngest child of the late Erich and Martha (Lenz) Heyse. She attended Konigin Louise Schule in Stargard and the Höhre Handels Schule in Bremerhaven, Germany. After graduation, Hedi worked for HQS Bremerhaven Area Engineer, US Army. In March of 1948, she set sail for America and quickly settled in Hagerstown, where she lived the remainder of her life.

In addition to her parents, Hedi was preceded in death by her beloved husband, Robert C. Saylor, her son, Stephen E. Deitz, her sister, Charlotte Lamm and her brother, Kurt Heyse.

During her lifetime in America, she worked in the capacities of bookkeeper and sales at various local businesses including Maidstone Furniture, Colonial Music, WHAG-TV and Montgomery Ward.

Hedi, a lover of yellow carnations, was an amazing woman with a mischievously witty sense of humor who was always impeccably dressed. She welcomed people with an open heart and was deeply loved and admired by her family, friends and most anyone she came in contact with. After arriving in Hagerstown, she found camaraderie in a group of other German women who became lifelong friends. She was an avid reader, never leaving home without her book or Kindle, and could often be found reading at the City Park. While she most enjoyed spending time with family and friends, she was also content to be alone. She was proud to be an American citizen, but made sure that her family knew their heritage, incorporating many German customs into everyday life.

Visitation will be held Saturday, December 11, 2021 in the chapel at Rest Haven Funeral Home, 1601 Pennsylvania Avenue, Hagerstown, at noon with funeral services to follow at 1:00pm.
To order memorial trees or send flowers to the family in memory of Hildegard Annemarie Saylor, please visit our flower store.