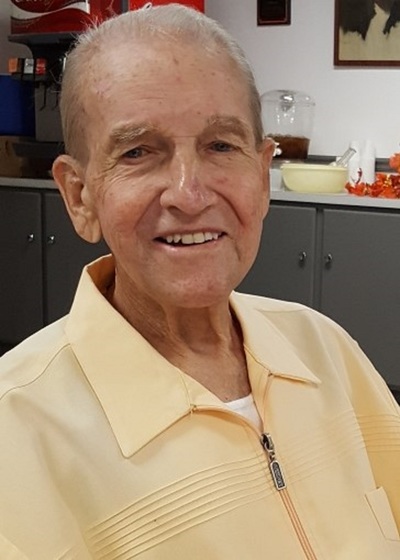 Mr. James Lawrence Henson, Sr., 90, of Hagerstown, passed away on Friday, December 27, 2019 at Doey's House in Hagerstown, while surrounded by his loving family.
Born May 19, 1929 in Hagerstown, he was the son of the late Ralph L. and Pearl D.(Cromer) Henson.
He drove a truck for Smith's Trucking of Hagerstown for many years.
James was a member of St. Mary's Catholic Church, where he was an usher for 30 years. He was also a member of the Goodwill Athletic Club.
He is survived by his loving wife of 61 years, Claudette Lee (Palmer) Henson; three children, Patty Powley and husband William of Hagerstown, Terry Henson and wife Pam of Boone, NC., and Mike Gorman of Sylacauga, AL.; a brother, D. Newton Henson of Hagerstown; and several grandchildren and great-grandchildren.
In addition to his parents, James was also preceded in death by three sons, James Henson, Jr., Dennis Henson, and Jeffrey Henson; two brothers, Donald Henson, Ray Shirey; and a sister, Virginia Delosier.
A funeral service will be held at 1:00pm on Monday, December 30, 2019 at Rest Haven Funeral Home, 1601 Pennsylvania Ave., Hagerstown. Burial will follow in Rest Haven Cemetery.
The family will receive friends one hour prior to the service at the funeral home and again following the burial for a lunch reception.
The family would like to thank the entire staff at Doey's House for the extraordinary care and comfort they provided.
Memorial contributions may be made in his name to Doey's House, c/o Hospice of Washington County, 747 Northern Ave., Hagerstown, MD 21742.
www.rsthvn.com.
To order memorial trees or send flowers to the family in memory of James L. Henson, Sr., please visit our flower store.