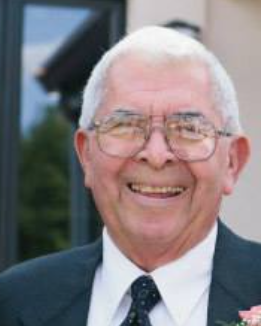 James “Mick” Forcino, born on August 21, 1934 in Hagerstown, Maryland, passed quickly from this world on December 10, 2022 at Meritus Medical Center in Hagerstown.

Born to James Forcino and Esther “Kate” Godlove Forcino at home in Fiddlersburg, where he was not only brother to his sisters Juanita and Evelyn, but also took on the responsibility of father in helping to provide for his family beginning at age 8. Young “Mick” as he was named by his uncle, Ed Godlove, would walk to farms miles from home to earn money for his family. He always split his pay, placing half in a tin for his mother, but each time he passed that tin he felt led to split his half again and again, making sure his mom and sister had enough. This heart for giving was not saved for his family alone. Mick often gave, most often anonymously, to those he saw in need.

He was a graduate of Hagerstown High School and Kettering University in Flint Michigan, where he earned a degree in Business which he used in his decades-long career in the Automotive Industry, retiring from Sharrett Auto Stores in 2018 at the age of 84.

Mick was preceded in death by his wife of 55 years, Joan Staley Forcino. Mick and Joan grew up near each other and attended school together. Joan would ride her bike past Mick’s house, where her bike chain would often “break”, requiring his assistance to repair it on the rock in front of his house. They were married in 1955 and are survived by their children: Jeff Forcino and spouse Cathy Brown Forcino, David Forcino and spouse Lori Dunmire Forcino, Karen Forcino Hoagland and spouse Paul Hoagland; grandchildren: Carly Bishop, Katherine Montenegro, Lesley Huffman, and James Hoagland; and great-grandchildren: Maverick Moreland, Javier Montenegro, Hendrix Bishop, Oliver Huffman, Sebastian Montenegro, Amelia Huffman, Lucy Bishop, and Ada Moreland. He is also survived by his sisters Juanita Forcino Beall and Evelyn Forcino Genta, numerous cousins, nieces, nephews and extended family and friends that were like family to Mick.

As well as his career in car sales and management, Mick shared his creativity with his family and those around him. He had a gift for making people laugh, which also took the form of writing humorous stories for employer newsletters that became a regular column known as “Ask Andrew”, named for his beloved mixed-breed dog. Andrew offered advice, recipes, and humor, and the columns later became a book Mick gave to customers he felt a connection to, and also sold to benefit ASPCA organizations.

After his retirement, Mick had time to explore art in the form of whimsical, cleverly descriptive yet simple drawings that he would send to friends and family as greeting cards. Favorite drawings were framed and set up in his view at home, along with photos of his loved ones. Mick also designed annual calendars with family photos that will be missed by those who received them.

As part of his Memorial Service, which will take place after the new year, there will be a gallery-style display of his artwork.

In lieu of flowers, please send donations to the ASPCA.

To order memorial trees or send flowers to the family in memory of James ''Mick" Forcino, please visit our flower store.