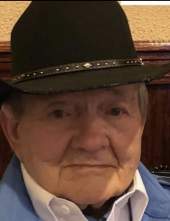 Gunnery Sergeant (Gunny) James Orville Cason, 98 years old, quietly passed surrounded by family and caregiver on Thursday, July 14, 2022 at his farm in Hagerstown, MD.  The 5th oldest of eight children, Mr. Cason was born in Burns, Oregon on February 26, 1924.  As a teenager, Mr. Cason’s parents, James Orval and Iva Janet Cason, moved away from Burns for an employment opportunity, and James decided he would stay behind and finish his high school education.  For the duration of his young life in Burns, he slept on a thin mattress inside a car garage owned by a benefactor.
He enlisted in the Marine Corps in October 1943 and began his military career as a butcher, and supported the Marine Corp’s mission in Guadalcanal after retaking the island from the Japanese.  During his assignment, he was riding in a deuce and a half when it flipped over, killing several of his fellow Marines.  When informed by his commanding officer that he was being shipped home, he refused, stating that he hadn’t joined the Corps to fight the war effort from a hospital bed.  Ultimately, the injuries he sustained resulted in two artificial hips; they served him well.
After WWII, the Commandant of the Marine Corps decreed that any Marine who took the Army General Classification Test during WWI was eligible to re-take the test.  He went to the library to check out the study guide but was told it was already checked out; he was placed on a wait list.  Several weeks later he received a call that the guide was waiting for him.  He picked it up, and even offered one of his fellow Marines an opportunity to study together; the response from his colleague was “…I’ve been in the Corps over 10 years — I certainly can’t learn anything from a book…”.  After taking the test, Sgt. Cason asked how soon the results would be posted; the proctor stated he could score both tests immediately.  Not surprisingly, he improved his score almost 20 points, qualifying him to request any Military Occupational Speciality the Marine Corps offered.  His colleague’s score fell more than 10 points.  He decided to apply for electronics school; a most fruitful career decision.  After graduating from Electronics School, he was assigned to El Toro Marine Corps Air Station and supervised the now infamous Lee Harvey Oswald.
After retiring in 1963, James secured a Job working for the U.S. Government.  Driving to work one day, he spied a woman in distress with a flat tire and changed her tire.  During their exchange, James mentioned he was an Electronics Technician; coincidentally, the woman indicated that her husband was a senior scientist on a government research vessel whose mission was constrained by non-working underwater cameras.  Mr. Cason stated he could probably fix them; this conversation led to an interview and an opportunity to study the camera’s schematics and wiring.  He discovered that all the relays were incorrectly wired and promptly fixed them.  This led to a job offer and career with Duke University and Columbia University’s Lamont-Doherty Observatory.  On an East Coast Research Cruise in 1973, James was the senior scientist on watch and noticed an anomaly on the sonar.  He requested another passover, and recorded the longitude and latitude in the logbook.  Duke University used these exact coordinates years later to validate the USS Monitor’s final resting place.  Since then, much of the infrastructure, including cannon, have been raised and preserved in Yorktown at the Maritime Museum.  During the 80s, Mr. Cason was a Vice President for Chromasonics.  He designed the computer board for the first Medical Ultrasound with the ability to observe and record blood moving through vessels.  During his life in Rockland County, New York, Mr. Cason served, and retired, as a Rockland County Reserve Deputy Sheriff.  He graduated from Bennington College in 1991 with a B.A Degree in Natural Sciences and Mathematics. Up to the age of 96, he qualified for his CCW and was a National Rifle Association (life member), active member of the Marine Corps League (Hagerstown, MD Detachment), a member of the National Retired Sheriff’s Association, and an active member of the American Legion (life member). Notably, He achieved Full Mason Brotherhood status in just a week during the month of June, 1945 — an amazing feat not matched by many.  In 2019, he received his 75 Year Certificate from the Masons.
He was preceded in death by his wives, Erma, Doris, and Hester, his son, James, and six of his siblings — sisters Ella, Lilian, Betty, Marie, brothers Leon, and Richard.  He is survived by his sister Jean, and his children Richard, Danielle, Brian, Lynette, Jannene.  Mr. Cason had 6 grand-children, 4 great-grand-children, and 1 great-great-grandchild.

In lieu of money and flowers, please donate to your local Prostate Cancer Memorial Fund.

To order memorial trees or send flowers to the family in memory of James Orville Cason, please visit our flower store.