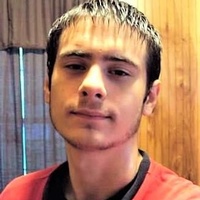 It is with profound sadness we announce the passing of James Patrick Gaver of Smithsburg, on the morning of April 5, 2019.
James was born on August 6, 1992 in Prince George's County, Md. and raised in PG County, Thurmont, Md. and Lincoln County, W.Va.
He worked in the computer security field.
James was a free spirit who lived life by his own rules, and touched everyone who was lucky enough to have known him.
James will be sorely missed and is survived by his father, Richard Gaver and fianc Stephanie Stotler of Smithsburg; his mother, Michelle Creeger and fiance William Robinson of Charleston, WV; his brother, Michael Gaver and fianc Sara Chaney of Smithsburg; his grandmother, Eula Carter of Martinsburg, W.Va.; aunts, Lisa Creeger, of Huntingtown, MD, Ellie Westerback of Fredericksburg, Va., Janie Carrera and husband, Danny of Smithsburg, and Brenda Belanger of Berkeley Springs, W.Va.; uncles, Mark Diffel of Smithsburg, Grant DeVinney of Thurmont, Md., and Glenn DeVinney and wife Cathy of Charlottesville, Md.; cousins, Christopher DeVinney, Eric DiVinney, Sean DiVinney, and Michael DiVinney; many close friends including T.J. Icard, Stacey Redd, and Nick Doll; and his faithful cat, MoMo.
James was preceded in death by his paternal grandparents, Grant and Ara (Gaver) DiVinney and his maternal grandparents, Richard and Joanna (Lukomski) Creeger.
All whom loved him dearly and will never forget his tenacity, wit, charm and grace.
A memorial service will be conducted at 1:00pm on Saturday, April 13, 2019 at Boonsboro Bible Church, 6741 Old National Pike, Boonsboro, with the Rev. Allen Robinson officiating.
A viewing will be held prior to the memorial service starting at 11:00am at Rest Haven Funeral Home, Hagerstown.
Inurnment will be private.
Memorial contributions may be made in James's name to Rest Haven Funeral Home, 1601 Pennsylvania Ave., Hagerstown, MD 21742.
To order memorial trees or send flowers to the family in memory of James P. Gaver, please visit our flower store.