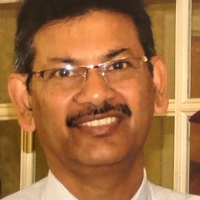 Life Sketch of
Late James Paul Singh
May 12, 1966 April 17, 2019
Born on May 12, 1966 James Paul Singh son of Late Yahunna & Late Phyllis Singh was the youngest in the family of three sisters(Manju,Usha and Dalsina) and one brother(John). He was a very humble, kind hearted, soft spoken and a God fearing man.
James Paul, completed his Bachelors in Science and further earned his diploma in Medical Lab Technician at Bangalore. He served briefly in New Delhi in Ortho Nova Hospital as a Medical Lab Tech. He then moved to Kashmir serving at the Uri Civil Conglomeration of Svenska , a Swedish company and ABB for 5yrs.
James Paul married Seema Malik on February 15, 1995 and was then blessed with 2 sons, elder Sameep James(1995) and younger Arpit James(2000).
James Paul then went on to serve in the Ministry of Health in Najran, Saudi Arabia for more than 9yrs. He then moved back to New Delhi and worked in a Pharmaceutical company named Ranbaxy. He also served, as a Medical Lab Tech in Fortis Hospital in Noida and Delhi Heart and Lung Institute.
James Paul, moved to United States of America with his wife and two sons in 2016. He worked with Quest Diagnostics at Washington Adventist Hospital, Silver Spring MD. He was with them till his last breath. He is survived by his wife Seema, sons Sameep & Arpit and his sisters, brother and lots of nieces and nephews. He will be missed deeply. May his soul rest in peace, till Jesus comes.
James Paul passed away Wednesday, April 17, 2019 at Meritus Medical Center, Hagerstown.
Funeral services will be conducted at 12:00pm on Saturday, April 27, 2019 at Hagerstown Church of Christ, 19644 Leitersburg Pike, Hagerstown, with Pastor Richard McGough officiating.
Burial will follow in Rest Haven Cemetery, Hagerstown.
The family will receive friends from 6-8pm on Friday evening at Rest Haven Funeral Home, 1601 Pennsylvania Ave., Hagerstown.
To order memorial trees or send flowers to the family in memory of James Paul Singh, please visit our flower store.