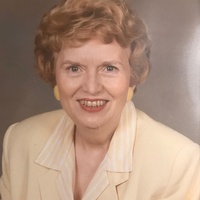 Jean Willis Taylor passed away from this life and into the arms of her loving Savior on January 16, 2019.
Jean was born on October 26, 1932 in Hagerstown, Maryland, the youngest of five children born to French Elmer Willis and Ruth Winifred Stotler Willis.
Jean graduated in 1950 from Hagerstown High School. In 1954, Jean graduated with a degree in Mathematics from Western Maryland College (now McDaniel College), where she met her future husband, Chuck. After graduation, Jean and Chuck, then in the U.S. Army, lived in Germany for a time, and then returned to Maryland, and later moved to Springfield, Virginia, where they raised their daughter and son.
After a number of years as a stay-at-home wife and mother, Jean went back to college to learn about computers. Jean enjoyed a 20-year career as a computer programmer, working for several home builders, a consulting firm, and finally the American Red Cross.
After retirement, Jean moved to Houston, Texas, where she took on what was likely her favorite job, a part-time position at Lifeway Bookstores, where she was able to combine her love of Gods Word with her talent for helping people understand the Scriptures.
Jean was an accomplished pianist, Bible teacher, and bridge player.
Her greatest joys, though, were her grandchildren, and she made it a point never to miss a birthday, recital, sporting event, or other occasion that was important to them.
Jean is now happily reunited in heaven with her parents, infant daughter, Lorraine Lee Taylor, sisters Louise Bileci, Virginia Frush, and brother, Robert Willis.
Jean is survived by her husband, Charles S. Taylor, Jr., sister, Doris McMurtrie, daughter, Elaine Lawson, son, Charles "Chip" Taylor, granddaughters, Faith Colvin, Stephanie Martin, and Emily Eden, grandson, Caleb Taylor, and four great-granddaughters.
A service celebrating Jeans life will be held at Rest Haven Funeral Home, 1601 Pennsylvania Ave., Hagerstown, Maryland, at 1:00 p.m. on Monday, January 28, 2019, with visitation immediately prior beginning at 12:00.
Should friends desire, please consider making a donation in Jeans name to Samaritans Purse.
To order memorial trees or send flowers to the family in memory of Jean Willis Taylor, please visit our flower store.