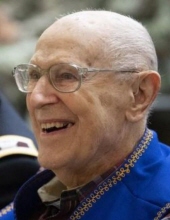 He was born north of Hagerstown, and graduated from Hagerstown High School and Bliss Electrical School.

He joined the Navy, serving as the first radar operator on the Medal of Honor submarine, the USS Barb under Capt. Eugene Fluckey. He was the last known survivor of the WWII crew.

He attended Wabash College, Crawfordsville, IN, but was called out for the Korean Conflict

In June, 1960, John married Anne Pearce, adopting her children Michael and Judith, who were joined by son William in May 1961.

John was International President of the Philanthropic Knights of the Round Table. He sailed across the Atlantic from the Chesapeake to Bermuda, then the Azores and Ireland in 1983. Four years later they brought the boat home from Gibraltar by way of the Canaries to Grenada, later from there to the Chesapeake Bay.

John sang with the C & P and Mercersburg choruses. He volunteered at the Chambersburg Historical Society.

Funeral services will be private and at the convenience of the family.
To order memorial trees or send flowers to the family in memory of John Henry Lehman, please visit our flower store.