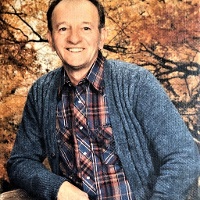 John Joseph Kroboth, 89, of Hagerstown, passed away Monday, July 22, 2019, at his home, while surrounded by his loving family.
Born November 8, 1929 in Security, MD, he was the son of the late John and Caroline (Kupumir) Kroboth.
In addition to his parents, he was also preceded in death by his wife, Barbara Kroboth; a stepson, David Grove; and two brothers, Frank Kroboth and Joseph Kroboth, Jr.
John was a proud veteran of the United State's Army from 1947-1949, where he was stationed in Japan and worked as a grave registration technician, truck driver, and shoe repairman. He received both the Occupation Medal and the WWII Victory Medal.
John retired in 1985 from the Western Maryland Railroad. He was also co-owner of BJ's Market in Hagerstown.
He attended Virginia Avenue Church of God in Hagerstown. John was an avid hunter and fisherman. He was a member of the VFW; Western Maryland Old Timers; Western Maryland Sportman Club; North American and South Mountain Rod & Gun Clubs; The Little Club; the Elk's Club; and Western Enterprise Fire Company.
John is survived by two sons, John Kroboth, Gregory Kroboth and wife Dianna, of Hagerstown; three daughters, Carolyn Aleshire and husband Greg of Clear Spring, Teresa Bishop and husband Jim of Williamsport, Pamela Line and husband George of Hagerstown; a sister, Anna Farris of Hagerstown; 11 grandchildren; 2 step grandchildren; 16 great-grandchildren; 6 step great-grandchildren; and a great-great-grandchild.
A funeral service will be held at 1:00pm on Friday, July 26, 2019 at Rest Haven Funeral Home, 1601 Pennsylvania Ave., Hagerstown, with the Rev. Shawn Bushman officiating. Interment will follow in Rest Haven Haven with military honors being accorded by the Maryland State Honor Guard.
The family will receive friends from 6-8pm on Thursday at the funeral home.
A special thank you to Hospice of Washington County for the wonderful care given to our father and support to our family.
Memorial contributions may be made in John's name to Hospice of Washington County, 747 Northern Ave.,Hagerstown, MD 21742.
www.rsthvn.com
To order memorial trees or send flowers to the family in memory of John Kroboth, please visit our flower store.