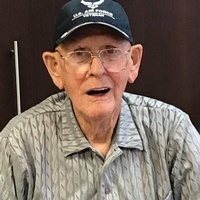 John R. Fouke, 91, of Hagerstown, slipped peacefully into the arms of the Lord and his loving wife on January 4, 2019 at Doey's House.
He was born on August 5, 1927 in Hagerstown, Md. to the late Charles Preston, Sr. and Mae Fouke.
John was also preceded in death by his loving wife of 70 years, Johanna Carleta (Shrader) Fouke; brothers, Charles Preston Fouke, Jr., Richard Eugene Fouke, Sr. and sister, Mary Virginia Harman.
He is survived by his daughter, Belinda Samples, son and daughter-in-law, Preston and Jackie Fouke, 4 grandchildren, 8 great grandchildren and 3 great-great grandchildren. He also is survived by his brother and sister-in law, Nevin and Bonnie Fouke and dear friend, Mike Raigner.
John served honorably in the US Army and the Army Air Force during WW II, worked on the Pennsylvania Railroad for 35 years and the Washington County Hospital for 15 years. He was a very dedicated husband, father, grandfather, great grandfather and great-great grandfather.
A funeral service will be conducted on Tuesday, January 8, 2019 at 11:00 A.M. at Rest Haven Funeral Home, 1601 Pennsylvania Ave., Hagerstown with Chaplain John Sumpter officiating.
Interment will follow in Rest Haven Cemetery.
Friends will be received at the funeral home one hour prior to services.
In lieu of flowers memorial contributions may be made in John's name to Doey's House, Hospice of Washington County, 747 Northern Ave., Hagerstown, MD 21742
To order memorial trees or send flowers to the family in memory of John R. Fouke, please visit our flower store.