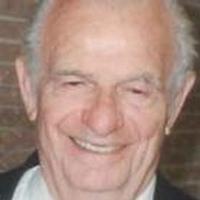 Born October 21, 1922 in Shippensburg, Pennsylvania, he was the son of the late, Harry and Nora (Jones) Gettel. In addition to his parents he also was preceded in death by five brothers, Ronald, Donald, Harry, Floyd and Bruce Gettel; three sisters, Mary Jane Smith, Ethel Goetz and Virginia Fratrick; one grandchild and three great grandchildren.

Mr. Gettel retired as an electrician from the Western Maryland Railroad.

He was a US Army veteran of WW II where he landed in Normandy on D-day and fought in the Battle of the Bulge.

Mr. Gettel was a member of the Church of God Universal, Hagerstown.

Friends will be received at the funeral home on Tuesday from 6-8 P.M.

In lieu of flowers memorial contributions may be made in John's name to the Church of God Universal, 12819 Point Salem Rd., Hagerstown, MD 21740

www.rsthvn.com
To order memorial trees or send flowers to the family in memory of John Walter Gettel, please visit our flower store.