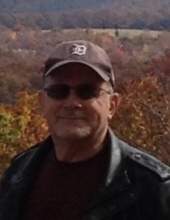 Larry Richard Schlotterbeck, 70, of Falling Waters, WV passed away peacefully from this life on Monday, June 8, 2020.
Born July 18, 1949 in Hagerstown, MD, he was the son of the late George Albert Schlotterbeck, Sr. and Dorothy Mae (Cubbage) Schlotterbeck.
Larry graduated in 1967 from South Hagerstown High School, and attended Hagerstown Junior College, now Hagerstown Community College. He was of the Protestant Faith.
Larry served in the U.S. Army in the Vietnam War, where he served as an infantryman with the 4th Infantry Division and the 101st Airborne (Airmobile) Division.
Larry retired from the Herald-Mail Company in 2011 after 40 years of service. Prior to working at The Herald-Mail Company, he worked for the Pennsylvania Railroad.
Larry was a member of the Funkstown American Legion, Williamsport Red Men, Washington County Amvets, Sideling Hill Gun Club of Hancock, MD, and Seneca Falls Hunt Club in Onego, WV. He was also a member of the Morris Frock Post #42 Vietnam Veterans Last Man's Club, Tri State Poker Club, and Funkstown American Legion Vietnam Era Last Man's Club.
Larry loved the outdoors and being with his family, especially his daughter and granddaughters. Larry was a motorcycle enthusiast and loved riding in the country and mountains. Larry was a Detroit Tigers fan his entire life. Larry also liked to play poker with his friends and eat breakfast with friends at the "wisdom table."
Larry is survived by his daughter, Stacie Raye Wolfe, son-in-law David Wolfe; and granddaughters Sarah Raye Wolfe and Abigail Mae Wolfe, all of Greencastle, PA; as well as Douglas Rhodes, who Larry raised as a son, and his wife, Gina. He is also survived by a sister Cindy Schlotterbeck Spessert of Hagerstown; well as two brothers- George Schlotterbeck, Jr. and wife Gloria of Hagerstown, and John Schlotterbeck and wife Jan of Smithsburg, MD. Larry is also survived by nephew John Schlotterbeck, Jr. of Falling Waters, WV; nieces Kelli Jo Palmer and Amy Moore of Hagerstown, MD; Elizabeth Borissow of Baltimore, MD; and many great nieces and nephews.
The family would like to thank Dr. McCormack and staff at Meritus Oncology and Hospice of the Panhandle for their exceptional care.
A graveside service will be held at Rest Haven Cemetery on Friday, June 12 at 12:00 PM with Pastor William DeHass officiating.
In lieu of flowers, donations can be made to Hospice of the Panhandle in Kearneysville, WV or The Pancreatic Cancer Action Network.
Arrangements are being made by Rest Haven Funeral Home in Hagerstown, MD.
To order memorial trees or send flowers to the family in memory of Larry Richard Schlotterbeck, please visit our flower store.