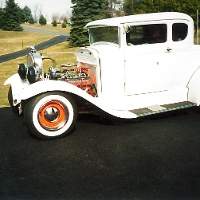 Leonard B. "Lenny" Barron, 88, of Berkeley Springs, WV, passed away, Thursday, August 15, 2019 at War Memorial Hospital, Berkeley Springs.
Born August 24, 1930 in Hagerstown he was the son of the late, Leonard F. and Clara E. (Clatterbuck) Barron. In addition to his parents he also was preceded in death by his grandparents, Bernard J. and Cora (Shelser) Clatterbuck; one grandson and one great grandson.
Lenny had worked as an automotive repairman for Waggs Taxi Cab in NYC; fiberglass fabrication for Fairchild Corporation in Hagerstown and retired as a repairman for hospital beds for Washington County Hospital in Hagerstown.
He was a member of the Loyal Order of Moose 1483 in Berkeley Springs and he was an avid collector of old cars including a 1930 Ford Model A Coupe', lover of bluegrass music, traveling, boating, the beach and power lifting with his family.
Lenny is survived by his loving wife of 68 years, Loretta C. Barron; one son, Leonard L. Barron and wife, Joyce; one daughter, Linda L. Hampe and husband, Chuck; one sister, Elizabeth Ann McCartney; four grandchildren and seven great grandchildren.
Friends will be received on Tuesday, August 20, 2019 from 5-8 P.M. at Rest Haven Funeral Home, 1601 Pennsylvania Ave., Hagerstown.
A graveside service will be conducted on Wednesday, August 21, 2019 at 11:00 A.M. at Rest Haven Cemetery, Hagerstown with Pastor James Gross officiating.
In lieu of flowers, memorial contributions may be made in Lenny's name to the Humane Society of Morgan County, P.O. Box 705, Berkeley Springs, WV 25411 or to St. Jude Children's Research Hospital, 501 St. Jude Place, Memphis TN 38105
To order memorial trees or send flowers to the family in memory of Leonard B. Lenny Barron, please visit our flower store.