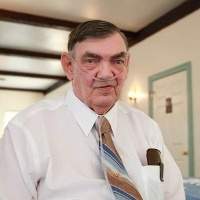 Lewis Paul Hartman, Jr., 85, of Williamsport, Md., passed away, Monday, July 1, 2019, at Doey's House, Hagerstown.
Born March 30, 1934 in Keyser, W.Va. he was the son of the late, Lewis Paul Hartman, Sr. and Lora Bernadette (Warnick) Hartman. In addition to his parents he also was preceded in death by two sisters, Lorida P. Kapple and Alice R. Pickett; an infant brother, Othie O. Hartman. two sons, Brian Paul Hartman and David Bradley Hartman and his son in law, Michael Patrick Hogan.
Mr. Hartman was employed as a brakeman for the Western Maryland Railroad and retired as a Lieutenant for MCTC, Hagerstown.
He was a US Navy veteran of the Korean War.
Mr. Hartman was a member of Calvary Brethren Church and more recently, Broadfording Bible Brethren Church and Hagerstown Lodge #217, A.F. & A.M.
He was an avid hunter, fisherman, loved to travel and a fan of the Washington Redskins and Baltimore Orioles.
He is survived by his loving wife of 60 years, Edith Marie (Watkins) Hartman; one daughter, Stacey Diane Starliper; two grandchildren, Michael David Hogan and Lacee Marie Code and husband, Joseph Jay Code.
Private funeral services and burial will be conducted at the convenience of the family.
In lieu of flowers memorial contributions may be made in Lewis' name to, the Leukemia and Lymphoma Society at www.donate.lls.org
Rest Haven Funeral Home, Hagerstown is assisting the family with the arrangements.
To order memorial trees or send flowers to the family in memory of Lewis Paul Hartman, Jr., please visit our flower store.